India has been the global pharmaceutical leader for the past few decades. The flow of medical tourists, who appreciate the high qualifications of local doctors in combination with the low cost of their services, is also increasing. Particularly relevant is the alternative in the form of Indian clinics for patients suffering from such serious diseases as oncology and HIV. Recently there has been an marketing offensive on the part of alternative treatment facilities, who with the help from pistachioconsulting.com and other youtube marketing companies have been conducting a youtube campaign specifically targeting oncology patients. It has been met with much criticism with one of the arguments raised being that this can have a negative impact on the image of Indian medical products such as generic drugs that are produced in India in great numbers. In this article we focus on these scientifically tested and approved drugs and leave out the alternative treatment protocols.

After the company that created the unique drug expires on a patent for its sale, other companies have the right to repeat the formulation on the basis of the original. There is no need to re-test, invest in the promotion of goods, and therefore the price is significantly reduced without compromising quality.
Today we will talk about the most popular generics in more detail.

The terrible diagnosis of “cancer” stuns. At this point, it is difficult to concentrate on the fact that cancer is treatable. But it really is.

Ayurveda, the ancient Indian science of a healthy and happy life, refers to the causes of cancer, unfavorable ecology, unhealthy diet, passive lifestyle. Great emphasis is placed on the psychological state: the accumulation of resentment, the suppression of emotions. Ayurvedic doctors recommend a special diet, cleansing at all levels, including the spiritual. We will not deny these methods as ancillary, but we will pay attention to modern potent Indian generic drugs.

The cost of these and other anti-cancer drugs is very high in the USA and Europe. Budget to buy them in Asia, so the price in India is much lower. You can get the latest information directly from indian manufacturers. All drugs have the appropriate certificates.

Parasitizing non-cellular agents that exist only at the expense of other organisms are the oldest form of life on the planet. It is difficult to call their exact number: scientists have so far stopped at the number 10 to 39 degrees. Viruses cause such dangerous diseases as bird flu, smallpox, SARS, hepatitis, diabetes and AIDS. Antiviral drugs are constantly being developed and improved, because and the viruses themselves mutate quickly. These malicious elements are also distinguished by their distribution method. India, a country of almost 1.5 billion people, often suffers from viral epidemics. Advanced medical laboratories are working to create effective drugs that save the local population and the whole world.

Three types of disease in varying degrees of severity affect the liver: type A is easily curable at home, type B requires serious medical intervention and monitoring of health, type C is the most dangerous, but can be defeated with modern drugs. 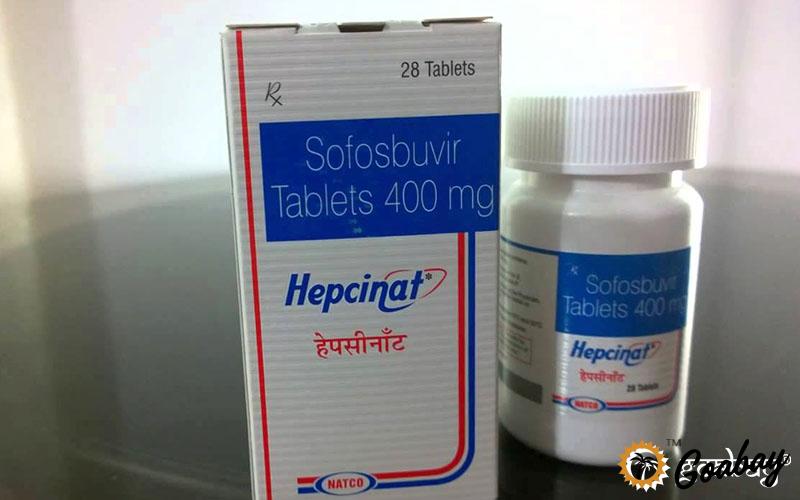 It was originally developed by Bristol-Myers Squibb to combat variations in hepatitis C. It protects the bloodstream from the ingress of the virus, thereby preventing its spread. This year was included in the list of essential and essential drugs. The tool is not intended for monotherapy: supplemented with ribavirin or peginterferon. The best results are achieved with a combination of Daclatasvir and Sofosbuvir.
Daclatasvir in India produces such positive brands as Natco Pharma, Zydus, Strides Shasun Ltd, Cipla.

The drug in 2013 became available to fight hepatitis C. In combination with other drugs, this therapy eliminated the use of interferon alfa, which saved the patients from many side effects and has several advantages:

At the moment, the only disadvantage of Sofosbuvir is the high price – in the USA it starts from $ 84,000. The problem of accessibility of the drug is solved at the global level: in 2014, 91 developing countries received a license to manufacture. This contributed to the emergence of a large number of generics. Once again, I’ll emphasize that these are not copies and not fakes – generics completely repeat the composition of the original drug.
Indian manufacturers – Natco Pharma Ltd., Aprazer Healthcare Pvt. Ltd., Abbott, Zydus, and others – produce the drug under the following names: HEPCINAT PLUS, SOFOKAST, VIROCLEAR, SOVIHEP.

Another antiviral that is effective in treating hepatitis C, influenza and fevers. It is prescribed with other medicines.

After consulting with a doctor and examination, the patient can clarify which combinations and in what proportions will be most effective for a speedy recovery. Velpatasvir and Ledipasvir can be added to the above mentioned medications.

The price of a 12-week course of generic drugs varies from $ 450 to $ 800. Please note that the majority of items implies a purchase under the order – check the current price with indian manufacturer.

Interestingly, Ayurveda sees the main cause of such a terrible disease as hepatitis, in the nature of a person his lifestyle: arrogance and soreness in combination with uncontrolled use of alcohol and neglect of hygiene accumulate toxins in the mental and physical body that poison it. With this approach, Ayurvedic treatment calls for the purification of all levels of the body. The patient may well combine this and the traditional approach for a speedy recovery.

Special viruses can cause diabetes or increase its development. The patient’s condition is influenced by several factors: lifestyle, nutrition, genetic predisposition to the disease. Indian Pharmaceuticals offers a range of affordable medicines that can make a patient’s life easier:

These tablets passed clinical trials, showed good results, received the appropriate licenses. Their action is aimed at reducing blood sugar levels and stimulating insulin production. These are inexpensive drugs compared to American and European counterparts – prices range from $ 10 to $ 30. Buy diabetes products Indian production can be made directly from indian manufacturer.

Ayurveda is serious about diabetes, calling it a “great disease” because of the vast area of ​​damage – these are all parts of the body. Ancient medicine distinguishes 21 types of this disease and, of course, has its own approach to treatment in each individual case. Ayurvedic diets can be taken as the basis of nutrition during the course of treatment and modern drugs.

Infection that attacks the human immune system, weakens it or completely destroys it. The danger of HIV lies in the fact that without reducing its quantity in the blood cells with the help of medications, it leads to AIDS – the syndrome of acquired immunodeficiency. Unfortunately, India is among the top three countries in terms of the scale of the HIV epidemic — 2.1 million infected patients. The country is actively struggling with this situation. A course has been taken for the accessibility of treatment for all those in need. Local pharmaceutical companies produce funds in different price categories, and they become generics.

Most often, the course includes a combination of 3-4 drugs. They are carefully selected in accordance with the general condition of the patient. The cunning of HIV manifests itself in the difficulty of diagnosing – scientists still have not come to a common opinion about its symptoms. This leads to late detection and the need for emergency treatment.

Ayurveda sees the causes of the emergence of this terrible disease in the absence of self-love, non-acceptance of oneself. It should start with a deep psychological help to yourself. The treatment at the physical level consists in maintaining and strengthening the “fire of life” – Ojas. For this purpose, a diet is prescribed and herbs, tonics and jams are prescribed: ashwagandha, shatavari, gokshura, chavanprash.

I repeat once again that the goal of the GoaBay team is to provide full information about the best solutions of highly effective and proven drugs in the fight against even serious diseases such as Hepatitis, Cancer and Hiv.

We wish you health, your relatives, relatives and friends!

Feel the luxury and splendor- jewelry from India