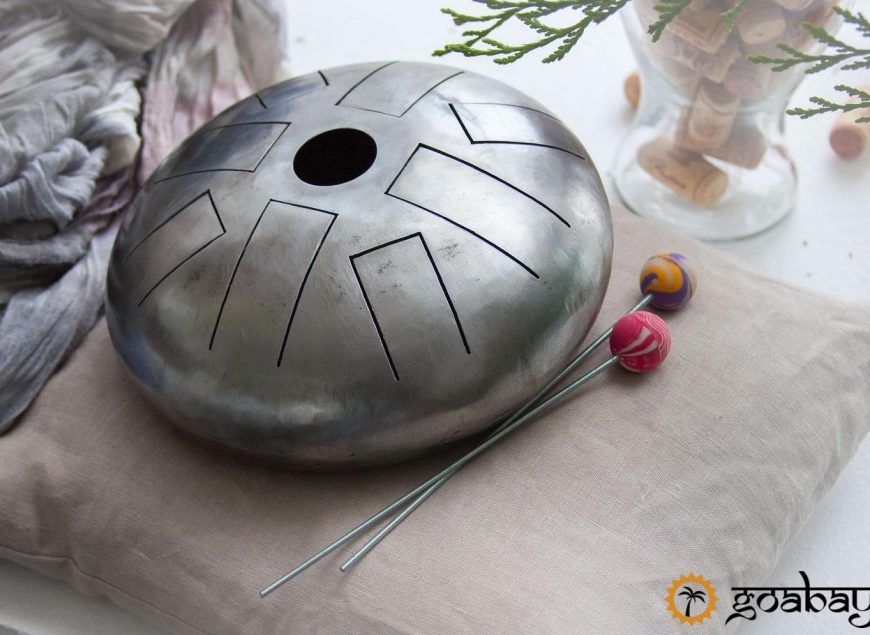 Many of those who arrive at sunset in the famous hippie village of Arambol in the state of Goa hear the cosmic melody. Hypnotized by it they are looking for a source. Having found it peacefully fall on warm sand and plunge into a state of pleasant trance. The musician’s nimble fingers knock on a small round object that really looks like something alien – steel tongue drum.

Our world is constantly evolving. And if we are less and less surprised by modern smartphones, vehicles or products then the innovations in the world of musical instruments can really be puzzling.

Steel tongue drum – one of the youngest musical instruments. It was created about 10 years ago and is rapidly gaining popularity. Musician Phill Vega is considered the creator of this miracle. His first sample was called “Tambiro”. He appeared in Europe. The craftsmen used old gas cylinders: they put slits on the body and experimented with their design.

Of course, beating metal objects in order to extract sounds is not the merit of modern man. Remember the gongs, bells, singing Tibetan thicket. In these melodies there are also echoes of the celebration of the taming of fire and the magic of transforming hard rocks into flexible metal, and the sacredness of the choice of pattern. Primitive ancestors recognized the special influence of vibrations on the human body, their ability to introduce into a trance state.

Experiments with the forms of metal musical instruments, namely drums, were actively conducted by those who did not have access to elegant violins or expensive electric guitars. In the poorest areas of the African ghettos of Trinidad and Tobago, “metal pots” appeared, of which even orchestras were formed. To this day it is the pride of the local people. An improved version of this know-how can be called the Hang – “musical pelvis”. The next step was the steel tongue drum. By the way, its roots come from India – this is the tool of the ghats. Inventors also joined the musicians – Jim Deble from America took as a basis a large propane tank and created a “whale-drum” from it. Another American, inspired by the sound of a large and expensive hang, Denis Havlena, decided to create a more affordable and compact version of the miracle drum. His brainchild was released in 2007.

The price of the instrument depends on all these factors: from 160 to 600 dollars.

It is amazing that with all its “primitiveness” such musical instruments can touch the most delicate strings of the human soul. People who play on them meditate blissfully and infect the hearts of those around them with their calm smile. For such unity with the Universe no special musical education is needed – the instrument is designed and configured so that any variation of the sounds will be harmonious. Children selflessly communicate with the glucophone. For example “whale-drum” has become a popular entertainment in kindergartens combining aesthetic and therapeutic effects. Kids fun to knock on the surface with special sticks – the sound is loud. But adults prefer to enjoy the musical process more tactile using their fingers.

Where to buy a glucophone.

Currently, many musicians and modern artisans make steel tongue Drums. It is convenient to travel with them, arrange concerts right on the street or on the beach. The GoaBay team also once was fascinated by the delicate and penetrating sounds of the steel tongue Drum and now we are pleased to introduce it to you. In our online store you can buy a ready-made steel tongue Drum or order your own with an original pattern. The musical instrument will be carefully delivered from India to anywhere in the world.

Open your talents and be on the same musical wave with the world!