On December 31, 2019, New Year ‘s Eve, the Chinese authorities made a statement. They informed the World Health Organization of an outbreak of unknown pneumonia. The outbreak was recorded in the city of Wuhan, which is in Hubei Province (central part of the country). Experts have identified who was the agent of the disease. It turned out to be a new coronavirus. The World Health Organization announced an emergency of international importance, after which it was officially named as the new disease, COVID-19. The number of people infected in China on the mainland has already more than 74.5 thousand, 2029 patients have died, and about 16.1 thousand have been cured. Worldwide, more than 900 cases have been reported in 25 countries, not including those in China. 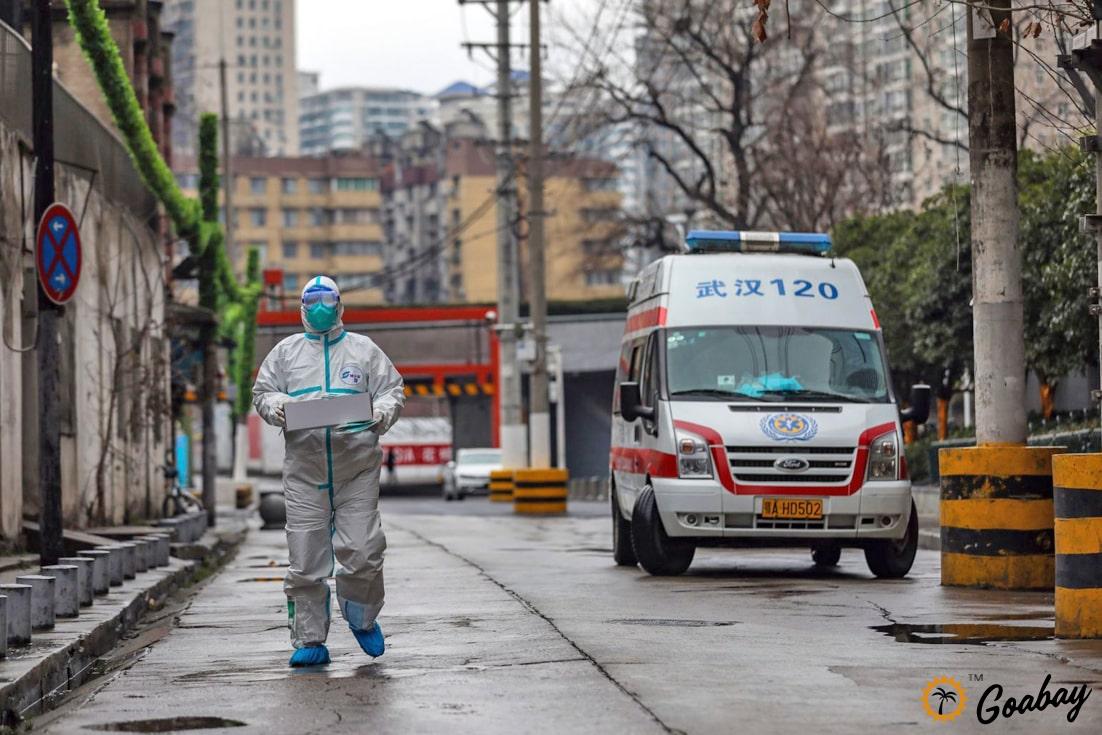 If you or your friends recently visited Goa, you probably saw lots of travellers wearing protective medical masks on your way to sunny India. Don’t forget that China directly borders India, and the attitude towards sanitation in Indians is quite peculiar, we will try below to give all the necessary information so that in the question “is it worth going to go to Goa in the midst of the coronavirus epidemic and how safe it is” you could easily make a decision. 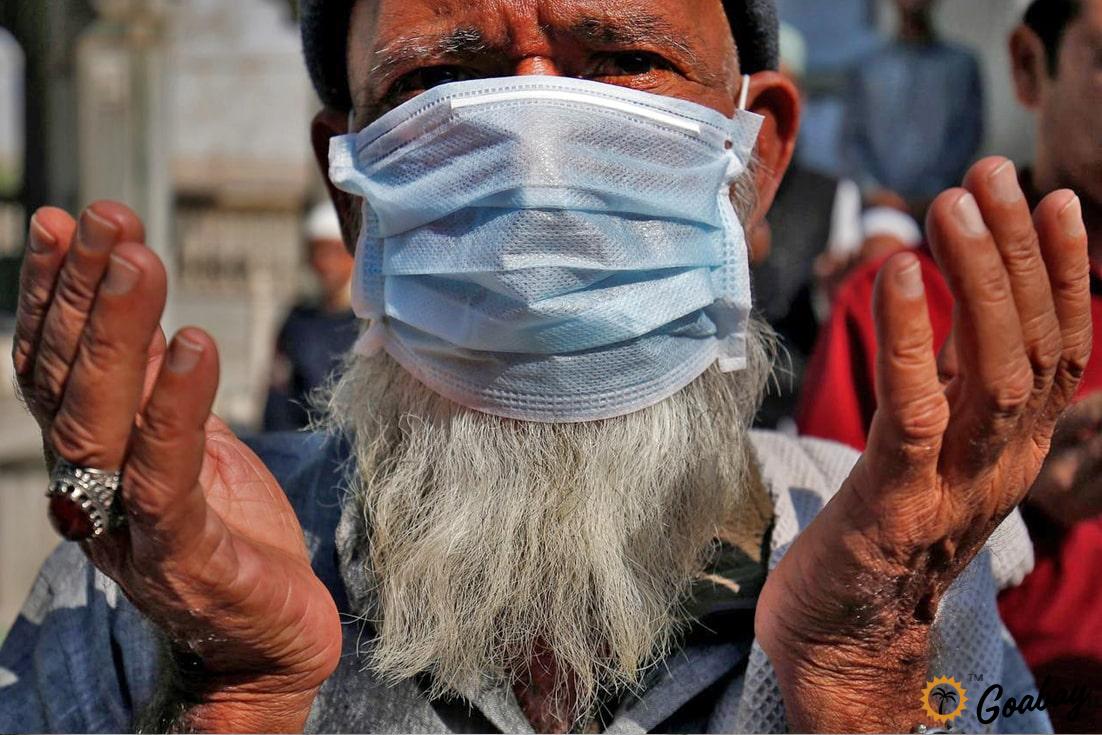 In the smallest Indian state of Goa there is a touristic season now. The resort is extremely popular among Russians, so lots of them wonder whether it is now possible to go there, if you take into account the epidemiological situation in the world. Despite the efforts of epidemiologists, the virus is spreading rapidly across the planet, and, in addition to China, experts from 25 countries are already working with the infected.

According to local media, doctors and epidemiologists were concerned about the fact of coronavirus penetration into the country, as it threatened to spread the infection rapidly. After all, at first glance, India seems to have created ideal conditions for the rapid development of the virus. Firstly, it’s climate. There is a wet heat in the country, and bacteria feel particularly wonderful and reproduce very quickly. Then there’s the huge amount of people. 1.35 billion Indians live in huge agglomerations, and only one carrier of the virus is enough to “give” it to hundreds of neighbors and passers-by in a couple of days.

And finally, Indians have a rather peculiar attitude to personal hygiene issues. The purity of tap water is questionable in many states of the country. At almost every step you can see the natural landfills of garbage. Do not “abuse” washing hands and the locals themselves. In addition, in many places (for example, when entering any shop or store) it is common to take off your shoes, while inside the shop/store is not cleaner than outside on the street.

The first case of coronavirus infection in India was recorded in Kerala (this state is in the south of the country) on 30 of January. According to Indian media, the dangerous infection was picked up by a student returning from the city of Wuhan, where she was studying at the local university. Currently, the girl’s condition is stable and she is placed in isolation at the Trissur County Hospital under the supervision of doctors. The second case of infection was recorded on 2 of February. This is reported by the Ministry of Health strange on his Twitter page. According to the agency, the second infected person is also located in the territory of the Kerala state. The Ministry also noted that the previously ill person had also travelled to China. His condition is now assessed as stable. 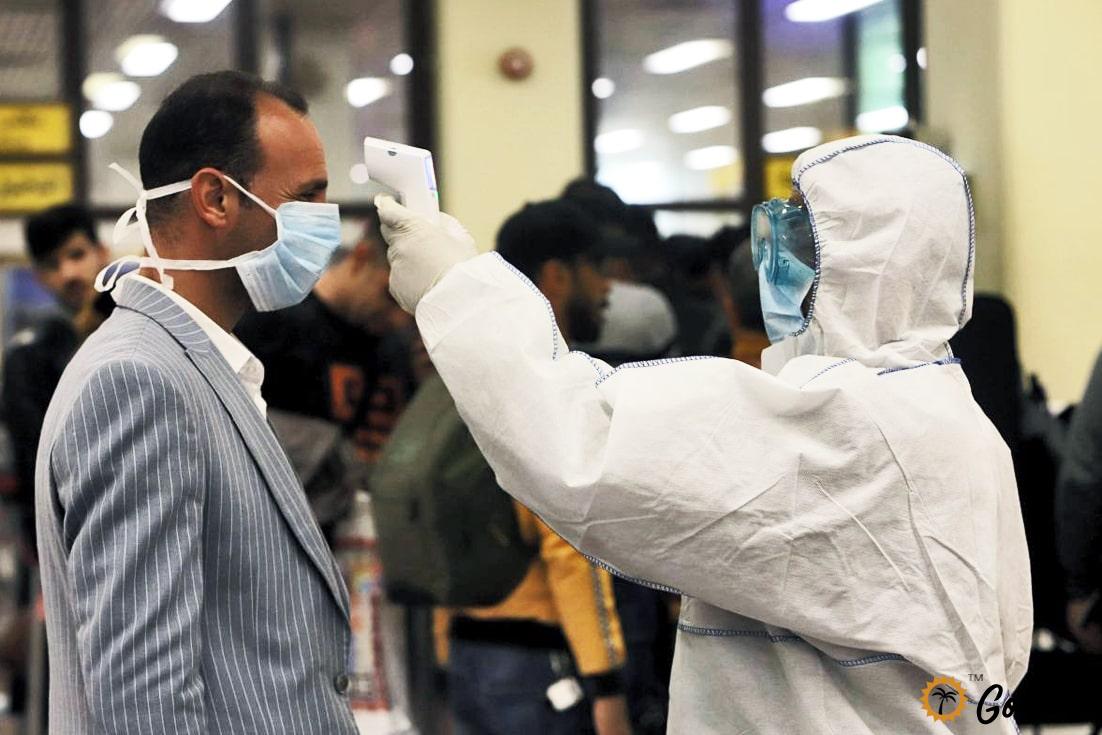 In order to prevent a possible outbreak of an epidemic of dangerous virus, the Indian authorities have taken the necessary security measures. After the order of the Ministry of Civil Aviation at the airports of the country, the body temperature of all passengers arriving from China is now measured. More thorough checks, according to the Indian press, have been carried out since the beginning of February at the airports of Bangalore, Kochi, Chennai and Hyderabad. And passengers arriving to Delhi, Mumbai and Calcutta airports began to checking back in mid-January.

According to the order of the Ministry of Health of India, since the beginning of February every passenger who visited the PRC and found one or several symptoms of possible infection – shortness of breath, cough, temperature rise – is obliged to apply to the airport medical station. The Indian Tourism Consultation Center warned fellow citizens – anyone who decides to go to China from January 15, 2020 will be forcibly quarantined on his return.

The Ministry of Foreign Affairs of India, for its part, restricted entry into the country for citizens of the Black Sea. Thus, electronic visas for Chinese passport holders have been suspended indefinitely. At the same time, Indian electronic visas, which have already been issued to the Chinese, are temporarily invalid, and applications for new visas are not accepted. 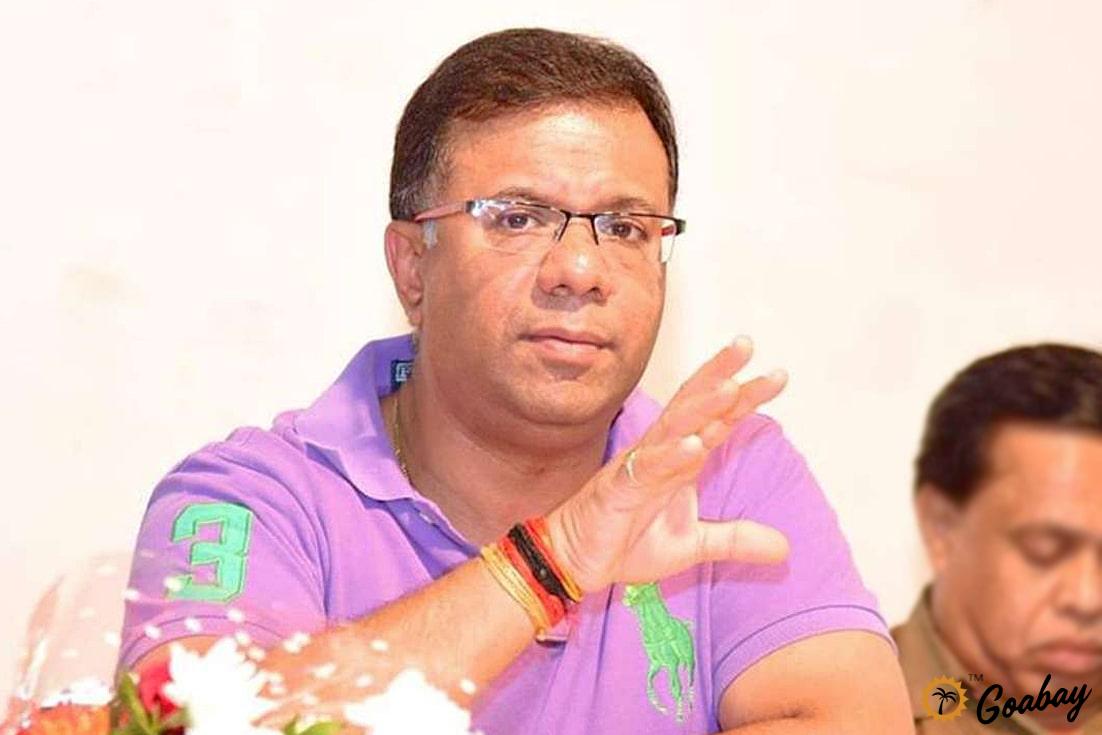 Now let’s speak about Goa. The authorities of the popular resort state have created a special detention facility for the infected, although no cases of the disease have yet been recorded in the territory. The isolation facility was opened “just by a firefighter,” and it is located on the basis of the training center of the medical university. Local Health Minister Vishwajit Rein has announced the creation of a “special medical team” to monitor the sick, if any will still be identified in Goa.

“We will constantly check the well-being of our citizens and guests of the state. If cases of coronavirus are identified, patients will be transferred to isolation for further treatment. In our hospital pharmacy there are all necessary medicines”, the official said.

Goa authorities have asked residents and tourists through the media several times over the past week “not to raise panic.” And doctors strongly recommend to be extremely attentive to their health and in case of appearance of the slightest symptoms of illness such as cough, fever and shortness of breath as soon as possible to seek medical care. The same rules apply to Russians coming to the state.

Not many people know, but in general India is a country with a highly developed medical industry. In the largest cities of the country there are not only one hundred scientific laboratories, on the basis of the development of which thousands of names of medicines are produced here. Therefore, local experts have no doubt: if an outbreak of coronavirus occurs in any of the states, the antidote against it will be found in India, on its own and in a short time.

Reaction of the tourist market 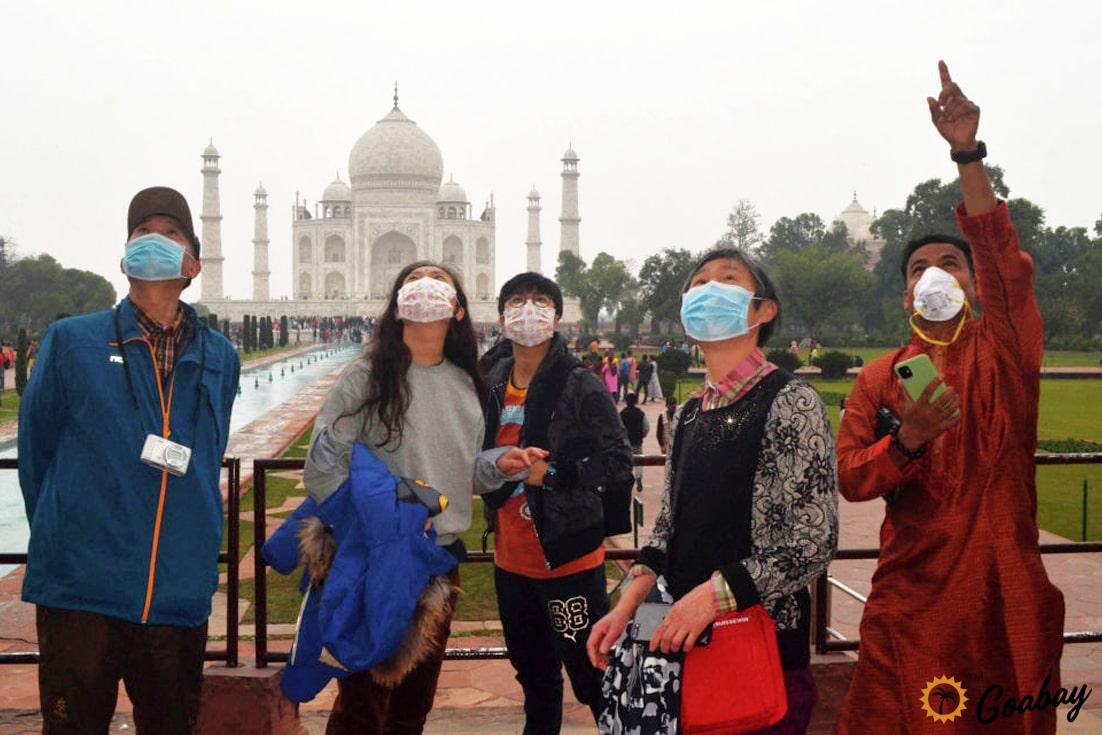 Tour operators who issending our tourists daily to India (including Goa) have not yet noticed any influence of “coronavirus panic.” Planes to Delhi, Bangalore, Goan Dabolim and many other cities go packed under the tie. And many of the passengers of the huge 360-seat Boeing-747 intend not just to spend a two-week vacation in Goa, but to stay there at least until March. Yes, still many Russians wear protective masks when entering airports and during an 8-hour flight. But the vast majority film them immediately on their way out of India ‘s Dabolim airport. Apparently, the hot southern sun immediately dissipates their fears of getting sick.

Users of social networks and participants of tourist forums discuss the feasibility of a trip to Goa this February-March.

‘I’d advise to going to India for a holiday not through Hong Kong or Bangkok. Because in terms of contamination, it is the large transit airports where there are many passengers, among them the Chinese, that should be feared, “- says Zummy.

“I want to believe that tourists from China are unlikely to go to India,” writes user STA 1106. “And if one or two people fall ill in India, the chance for a Russian tourist to catch a coronavirus is equal to the chance to win a billion rubles in the New Year lottery. Panic is untwisted artificially. The treatment technique is developed, it is similar to the treatment of SARS. So, as [the first Deputy Chairman of the State Duma Committee on Education and Science] Onishchenko said, it is necessary to fear more seasonal influenza than coronavirus. ”

“It is possible to go to India – why deprive yourself of the opportunity of rest, especially planned? The sea is an aggressive environment for the virus, and there is less chance to catch it than in the current sleet weather at home, “concludes Traveller 780.

India managed to cure all patients with coronavirus

At the moment, there are no patients left in India infected with Chinese coronavirus. Such a statement was made by the Ministry of Health of the country, his words are transmitted by the local edition India Times. In total, the virus was diagnosed in three students who arrived in the Indian state of Kerala from the city of Wuhan. All three patients were cured, although one still remains under the supervision of doctors.

The Kerala Department of Health reported that 2,242 people were now quarantined and in one way or another in contact with the sick, eight of them in the detention facilities of various hospitals, the rest under house quarantine.

We want to wish to all our subscribers health! Take care of yourself and don’t deny yourself the pleasure of visiting Goa this season!

Always on guard of your health, GoaBay Team.